A common challenge that our users face is a need to render and display huge images like raster logs and GeoTIFF files. Interactions occur in the client’s server architecture, and while these images can be stored in the cloud or on a server, they are usually very large files, making it difficult to move from the server to the client. It is also time-consuming to read data from the cloud and unpack operations for TIFFs.

When trying to open these files, the user may have to wait up to several minutes to start to receive data from the server. This can lead to a poor user experience because the client doesn’t know if a server is working or if it’s already halted the solution that we applied. So we wanted to improve this for our users.

In order to optimize several areas for the client as well as on the server, we decided to focus on the server data loading from cloud storage and enhance the unpacking of TIFFs. We found a way to minimize the number of requests from client to server and pass more calculations from server to client, reducing the calculation complexity on the server.

So, how did we do it? On the client side, we have a class called tiled shape which requests tiles from the server. 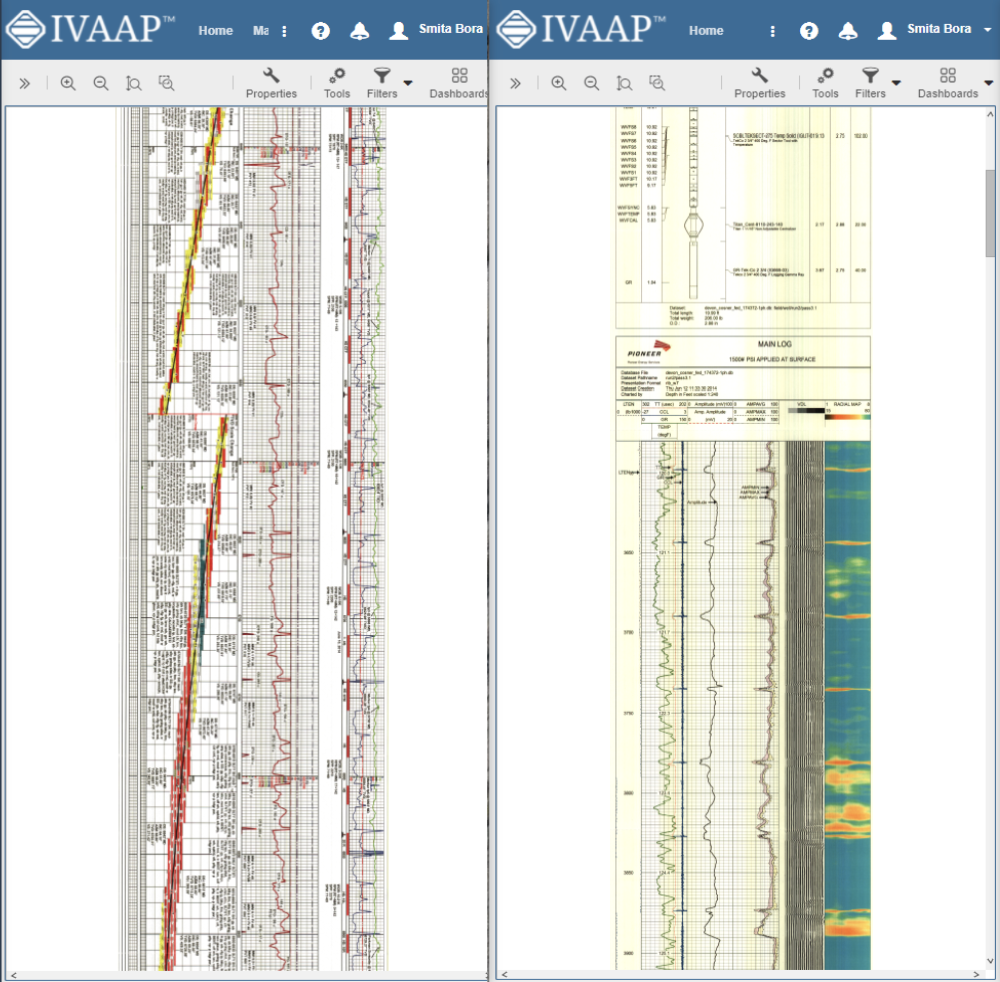 For each tile, the client requests its X and Y position, height, and scaling. In the past, when a user would interact with an image and send a request to the server, requesting new tiles, it would be too much for the server to handle, causing even more delays.

To minimize the impact this request has on the server, we decided to check if the  user stops interaction by timer. After any interaction on the client’s side with the image, we start a timer. Before the timer is up, if no requests are sent from the client to the server, this timer finishes quickly and the image loads. This allows us to minimize the number of requests from client to server.

Another feature we optimized is the ability to pass information from the server to plan calculations for the correct tile position and correct tile transformation. By passing the data from server to client, the client calculates the correct position for tile on each side. We also use a cache of tiles on the client side to ensure that we do not request the same tiles. Image cache on a server side is also possible, but after the first request, it is necessary to download the requested image from the cloud, unpack the image, and then start to copy and scale the requested tile to convert this image.

On the server side, we implemented TIFF unpacking on a highly performing native implementation. This is a multithreaded and thread safe solution., which allows us to deal with several requests from clients at the same time. As a result, a large TIFF image file can be stored in the cloud without a problem and an unpacking time of less than four seconds compared to the previous solution’s 60 seconds. We also optimized the cloud access speed on the server side by renting a high-performance AWS instance with high-speed access to AWS cloud storage. This allows us to download the whole TIFF image from the cloud in less than three seconds, making the download speeds about 800 megabytes per second.

As a result, we spend around three seconds to download the image from cloud storage and about four seconds to unpack the image. So it only takes roughly seven seconds to download, unpack the image, deal with client requests, scale the requested tiles, and send them back to the client as opposed to having to wait several minutes to possibly hours for the same process.  Overall, this process greatly improves the user experience.

The new raster logs and cloud TIFF rendering are just one of the many new features and improvements from the latest GeoToolkit.JS 2021.1 release.

INT recently announced the release of IVAAP 2.9. We sat down with Thierry Danard, INT’s VP of Core Platform Technologies, for a quick chat about what this release includes for the Data Backend SDK.

Hi Thierry, what can you tell us about IVAAP 2.9 for the Data Backend?

There are a few low-level changes that won’t make it to the release notes, but that will make a difference for users. For example, we optimized the data caching mechanism. Instead of being based on the number of datasets, the data caches are now based on the size of these datasets. This typically means lower latency as more datasets tend to be cached within the same memory space. This is a feature we initially used only with WITSML wells that we have extended to other connectors and data types.

At a high level, we added a powerful “tiled images” feature. Some INT customers have large rasters that they need to visualize, or that their customers need to visualize as part of a portal. These images are stored as good old TIFF image files on a local file system or in the cloud. To visualize these images in IVAAP, you just need to point at the location of these tiles, and IVAAP does the rest. While the idea of visualizing images online might seem mundane, there is quite a lot of technology to make this happen.

First, these image files are LARGE. They can be up to 4 GB in TIFF format, and that’s a compressed format! To make the visualization of these images seamless, you need to be really good at:

That’s the technology side of it. From a business perspective, what’s really interesting is that there is no preprocessing of the images required. The ingestion workflow requires no specialized tooling. There’s no need to “precut” each TIFF as multiple tiles at multiple resolution levels. The “cutting” is all done on the fly and it’s seamless to end users. This is particularly important to keep storage to a minimum when you migrate your image library to the cloud. When each TIFF file takes gigabytes, a library of only a few thousand files already has a significant footprint, so you don’t want to expand that footprint with file duplication.

Is this image tiling feature something I could use for my own image storage?

Yes. The technology we developed makes abstraction of the storage mechanism possible. The reading, cutting, rendering, and caching are part of the IVAAP Data Backend SDK’s API. You can reuse these parts in your code.

What’s the purpose of this SDK, and how does it apply to images?

One of the strengths of IVAAP is that it allows the visualization of data from multiple data sources. For example, just for visualization of wells, IVAAP supports Peloton WellView, PPDM, WITSML, LAS files in the cloud, etc. These data sources typically share a common data model, but what’s different between them is the medium or protocol to access this data. The typical use case of the IVAAP Data Backend SDK is to facilitate the implementation of that access layer.

Images are treated as data. Just like we have “well” web services, we have “image” web services. The image web services are generic in nature—it’s the same service code running regardless of their underlying storage mechanism. It’s only the access code that differs. As a matter of fact, we implemented access to four types of image stores on top of our SDK:

In this particular example, we used our own SDK to develop both the data layer and the web service layer.

Is the IVAAP Data Backend SDK a web framework?

While this SDK does provide an API to create your own web services, it goes well beyond that. If you call the IVAAP Data Backend SDK a framework, then it’s a highly specialized framework. And it’s not just a web framework, it’s also a data framework. Also, web frameworks tend to force you into a container. To scale your application, you are limited by the capabilities of this container. The IVAAP Data Backend SDK abstracts the container away, giving customers multiple options for how to deploy it and scale it.

From a technical perspective, a good SDK should empower developers. Often, this means requiring the least amount of effort to get the job done. From a business perspective, a good SDK should reduce development costs. Calling the IVAAP Data Backend SDK “yet another web framework” is missing the point of its value. Its value is not about doing the same thing as your favorite “other framework,” it’s about fitting your use case in the most effective way.

Then … how is the IVAAP Data Backend SDK a good fit?

Obviously, the integration with the rest of IVAAP is a strong benefit. You could write your data access object (DAO) layer using the API of your choice, but you would still need to write more mundane aspects, such as:

The second fit is that the SDK is designed to work with geoscience data. It integrates the data models of multiple data types, such as wells, seismic, surfaces … and raster images. While the IVAAP Data Backend SDK can be used outside of a geoscience context, a good portion of its API is geoscience-specific.

During design, we were particularly careful not to make any assumptions about how our customers’ geoscience data is stored. No matter how exotic your data systems might be, the IVAAP Data Backend will be able to access them. We are not just talking about storage, we are also talking about real-time feeds and machine learning (ML) workflows. We verified this multiple times. One particularly visible example is OSDU. INT has been on the leading edge of OSDU development, following the multiple iterations or flavors of OSDU services without requiring a change to our SDK.

How is the IVAAP Data Backend SDK effective?

Its API is quite simple to learn. Multiple INT customers have used this SDK to develop their own IVAAP customizations, and its API has always been well received. One aspect that is particularly liked is the lookup architecture. Plugging a class requires no XML, just one Java annotation, and it’s the same annotation used across the entire API. It’s an elegant mechanism, easy to learn, and even easier to use.

The real proof of the IVAAP Data Backend SDK’s effectiveness is the time it takes external developers to learn it and develop their own connector. We tested the effectiveness of the SDK by asking new hires to develop a connector, only armed with their knowledge of Java. Without any prior geoscience knowledge, the average time to get that connector up and running has been 2 weeks.

Another way that the backend keeps developers effective is by not taking away their favorite development tool. While the IVAAP Data Backend uses a powerful cluster architecture in production deployments, the typical developer’s day is with their favorite IDE (NetBeans, Eclipse, IntelliJ, etc.) and a well-known application server (Tomcat, Glassfish). Development is much faster when you don’t need to launch an entire cluster for a simple debugging session.

Effectiveness and fit are key. The goal of a typical framework is to help you get started faster. It provides a shortcut to skip the implementation of the mundane concerns of an application. In IVAAP’s case, for many customers, the application itself is already written. For these customers, the IVAAP Data Backend SDK helps you get finished faster instead. It provides customers with the API to finish the last mile of an IVAAP deployment, the access layer to their proprietary data store.