The inspiration for this blog comes from this poster that was recently added to our walls at the office.

So, how does INTViewer help developers empower users?

INTViewer provides many features off-the-shelf, but its extensibility is unique. Developers can customize numerous aspects of INTViewer by extending the INTViewer platform. And one way to extend this platform is to write Java plugins.

Here’s an example: INTViewer 5.2 has a new feature called Auxiliary Widgets which allows content to be displayed above XSection windows. I also mentioned this feature when I introduced the Normalization widget.

We maintain a dedicated site for developers to find tutorials and other reference material to learn how to write plugins. For example, here’s the step-by-step guide to help developers add their own auxiliary widget.

What’s remarkable about this example is that it only takes three small files to plug this fully functional feature. Meaning that not only is INTViewer an extensible platform, but it is also a platform that is simple to extend. We spent many hours on the public API to make sure it is easy to understand and easy to use, yet powerful.

Now, why is the ability to add content on top of XSection windows valuable? Hardware vendors are one example of a company that would want to leverage this feature. Companies who sell acquisition hardware need to provide a tool for their customers to visualize the proprietary data captured by their instruments. The auxiliary widgets area is an ideal place for showing additional data specific to acquisition hardware. As end users visualize a seismic dataset recently captured, they also visualize vital parameters of the acquisition session without having to open another dialog or window.

Extending INTViewer is a broad topic, impossible to cover in just one post, so check back often for more articles on this topic and more. Or to get started with plugins, check out this architecture article.

INTViewer has been around for quite a while now. And over the last 8 years that I have worked on it, it has evolved a lot. As more and more users used the application, we were able to solicit and integrate their feedback, further maturing the application.

Sometimes, however, you don’t need to add new features to make a software great — just revisiting a design can sometimes add value. For INTViewer, the Coordinate Reference System (CRS) selection dialog is one of the areas we improved just by tweaking the design.

The most often used window of INTViewer is the XSection. When we surveyed our customers, we found that many didn’t know about the mapping capabilities of INTViewer. This is a shame since INTViewer makes it very easy to visualize your survey from a bird’s eye view in the map window.

To integrate satellite imagery and view your survey in context, you need strong coordinate reprojection capabilities. Five years ago, we worked to make INTViewer GIGS (Geospatial Integrity of Geoscience Applications) compliant. Actually, most of the work was done in J/CarnacGIS, a Java library designed for the visualization of Geographic Information System (GIS) data. INT developed this product separately, but it is included in INTViewer. I leverage its API often when I develop plugins, and customers do, too. CRS conversions done with INTViewer are very accurate — they use NADCON (North American Datum Conversion) and NTV2 (National Transformation version 2) grids when available. But a key to a valid conversion from one CRS to another is to pick the right CRSs in the first place!

Up until INTViewer 5.1.1, the CRS selection dialog looked like this: 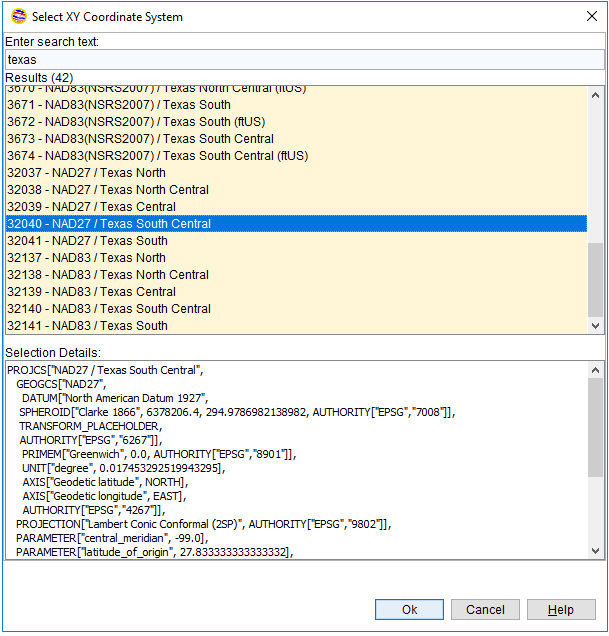 This dialog essentially listed all CRS in the European Petroleum Survey Group (EPSG) database, prompting the user to choose the right code … among approximately 2,000 codes.

In INTViewer 5.2, the user interface has been enhanced to show a map that highlights the area of use of the CRS you are selecting: 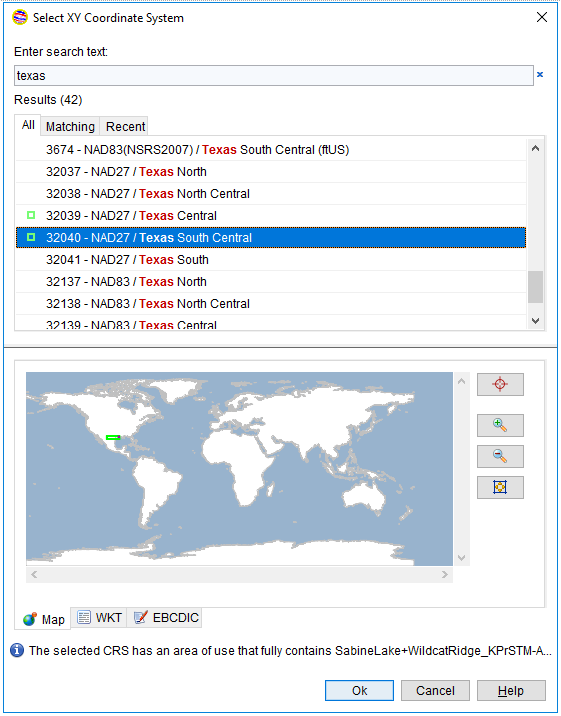 When you perform quality analysis of your data before sending it for interpretation, you want to make sure that it is properly geolocated. This dialog allows you to check that the CRS you are picking is in the right region, and it highlights its area of use. If your data falls outside of this area of use, the validity of CRS conversions is compromised, leading to invalid visualizations.

If there is only a partial match, a yellow badge will be shown.

This is a simple way to validate your selection. The CRS selection feature itself hasn’t changed, but the user experience has improved.

Users who work primarily on one survey won’t be affected by this change: they know by heart which CRS their survey uses. For me, as I often switch from one survey to another when I perform demos, this makes my task much simpler as I don’t always remember the EPSG code I need to enter. Customers who use INTViewer as a presentation tool (for example to showcase acquisition surveys) should also benefit.